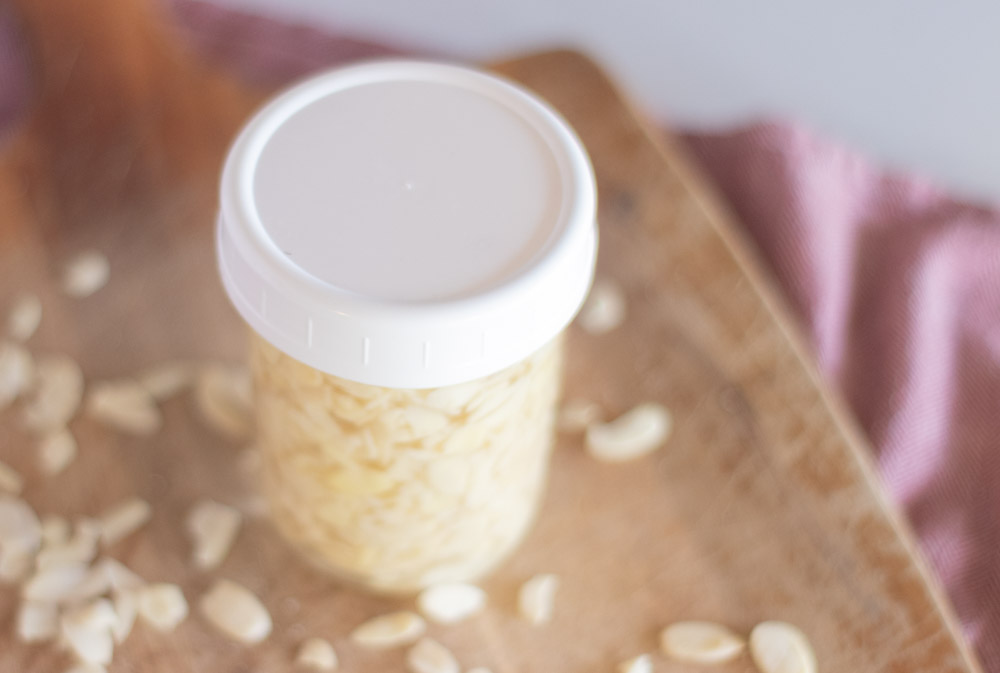 I have been making different extracts lately and the newest one I have tried is making almond extract. I wanted to share how I made this simple almond extract at home.

This post contains affiliate links, which means I make a small commission at no extra cost to you. As an Amazon Associate I earn from qualifying purchases. See my full disclosure here.

A few posts/videos ago I shared that I made vanilla extract from scratch. I was so excited to try it because it is the most used extract in my kitchen and it can be so expensive. With the holidays coming up in just a few short months, I wanted to have plenty on hand and was hoping my homemade vanilla would be done in time. It has lost the alcohol smell and I have been using it here and there in a few recipes. I want to let it sit a little longer though before really using it up. The smell is just irresistible!

After making the vanilla and realizing how simple it was, I wanted to also try almonds. So I ordered some blanched, sliced almonds and tried my hand at making almond extract.

Y’all, this was even easier than the vanilla extract. I love almond extract. I used to bake a lot of cakes (I even baked my own wedding cake) and almond was my favorite extract to use in the cakes and icing. I love the taste and smell. But I honestly had no idea what it was made of, how it was made and y’all know I like to make things from scratch myself. I make my home cleaning products, home décor, cook from scratch- these are the things I do for fun. Weird or not, I love it.

I wanted to share this because even though it is still not ready, I can tell a significant change in the smell after a month. Now, my understanding is that it will take longer than vanilla extract so I am not expecting to use this soon but when I do, I will update!

Now this is the first time I have made this and I am no expert on the topic of making extracts at home. I simply just enjoy trying these types of things and like to share for others who enjoy it too.

One thing I will change is the vodka. I talked about this in my vanilla extract post and video but everyone tells you to use cheap vodka and while the benefit here is the cost savings, it kind of defeats another purpose for me. I do make things from scratch because it is generally (not always) cheaper. But I also do it for the health benefits and knowing what goes into the things we eat and use. So by using cheap vodka that was not processed in a way that matches my values on food, I was losing half the benefits immediately.

So the next time I do this, I will be buying a higher quality alcohol. I still need to do some research on this because I definitely have very basic knowledge of alcohol. And by basic I mean basically no knowledge. I have heard good things about Everclear from Julie over at Capturing Wonderland and so this is what I will be researching! She has a great post on how she made her vanilla and gives a lot of great information. She also has a video on the topic as well!

Another change I would make is a bigger jar and less almonds. I really am not going to get as much as I would like out of this batch, but that’s ok. I really was just testing the waters as I had read that almond does not do as well. If I like the end result (which I already like based on the change in smell) then I will definitely change this up.

Here’s what I did and learned during the process.

I used a half pint mason jar. I also used blanched almonds to keep it from not becoming bitter and sliced to help the vodka draw out the flavor better.

First, I filled up my jar about 2/3 of the way with almonds. I do think this would do better if you only filled it up about halfway with almonds. I found that you really do not get as much extract as you do with vanilla because (obviously) almonds take up more space. I’m not sure why this didn’t dawn on me sooner but you live and learn I suppose. I also did a smaller jar because I use less almond extract but I wish I had made more than the half pint jar.

Next, I just poured by vodka over the almonds until they were completely covered. Easy-peasy.

I added a lid and then gave it a good shake. I have kept this in the dark pantry and on the kitchen counter. A dark place would be best. I like to give it a shake every day but even every week would be just fine I’m sure.

It has been probably about a month and the smell is starting to change but I will say that some of the vodka has evaporated. I did not notice this as much with the vanilla extract. You could probably continue to top off the jar but I have not.

Have you made any extracts at home? Which have you made? There are so many you can make and I love how simple and frugal they are! I will continue to add to the post the updates on both the vanilla and almond extracts!

Here on the blog and on my YouTube channel, I regularly share recipes like this recipe for almond extract along with other old fashioned and simple living topics. For more, be sure to join our old fashioned community below!